This winter has been brutal for those living in the North.  As soon as one storm is finished, the next one hits.  And just in case you’ve forgotten how many storms you’ve managed to get through, the weather service has decided to name them from A-Z.  At this point I think they are up to T.  But really, after K doesn’t all just become one long, nasty winter?

I grew up in Niagara Fall, New York-so I can sympathize with my northern friends and family.  I lived through the blizzard of ’77 and even though I was just a teenager, I can still remember how miserable it was.  And we didn’t have all the techy stuff to get us through, either. When the phone lines went down because an icy tree branch broke, well that was that-you had no phone.  Instead, you would bundle up and walk next door to check on your neighbors and make sure they were okay.  If the power went out, you relied on the wood stove or fireplace for warmth and played board games for entertainment.  And for exercise you shoveled snow and  (wait for it) went back out a half hour after you finished because either the wind had blown drifts across the walks or the snow plow had just gone through and blocked the end of the driveway.

Before the storm would hit there were chores to do too.  Wood had to be chopped for the fireplace, hoses disconnected so they wouldn’t freeze the water still inside, gas can filled for generators or snow blowers and a trip to the market was a most for bread and milk. 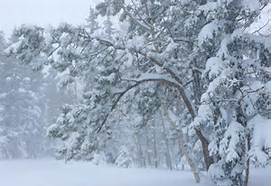 Yet for all the hard work that we had to endure and all the inconvenience, there was still something magical about the storm and it’s aftermath.  You have never seen the perfect beauty of a tree frozen in place with icicles hanging from the branches.  The wind will have created mounds of snow to be built later into snow forts and then, once the wind calms, there is an unbelievable silence.  Some may say it is eerie, some peaceful, but to me it is magical.  Only the sound of icicles dropping break the silence.  It is almost as if you are in another world.

And then the kids find out that there is NO SCHOOL!  Cheers can be heart from inside the house, mixed with the groans of parents wondering what to do with these happy urchins.  In no time at all the children are bundled up so heavily that they can hardly move (remember the scene from A Christmas Story?) and are out the doors.  Snowballs are flying, sled are being dragged out of garages and the older kids are reviving up the snowmobiles. 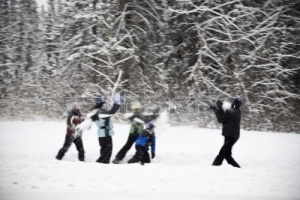 Some how we managed to live through each storm and prepare for the next.  It is just a way of life.

Not anymore….I would much rather have to prepare for Hurricane season and each storm to come that will be named from A to Z.

***Just a note: this was a writing challenge that I threw out to my readers: just post one word that you would like to see my try to blog about (this one came from Karen in New York).  Feel free to join in the fun!